skip to main | skip to sidebar

Twenty. I'm up to twenty. I'm seeing double treble. And this is the scene on the kitchen table: 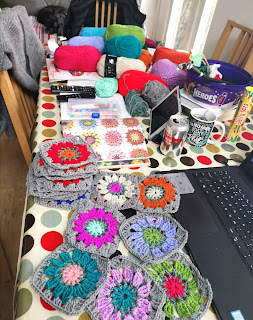 It's not going to get any better for a while, is it. Particularly because, once I reached thirteen* and laid out a single-line seven by seven, I decided that eight by eight would be a better fit. That sent the granny square requirement soaring from forty-nine to sixty-four. Forty-four to go.
Poor Cosmos, long-suffering at the end, would quite like a walk now please.
*In honesty, I reached fourteen, because my poor brain failed to realise that a single line seven across plus seven down is thirteen.

Posted by glatisanta at 3:58 PM